Step Inside a Serene Sanctuary

When Doug Fregolle, owner of Doug Fregolle Promotions, first walked into his four-bedroom, 5,400-square-foot Beverly Hills home, it simply felt right — he instantly had a vision. “It just had a good vibe,” he says. “I immediately wanted to transform it into a minimalistic, warm and contemporary space.” With a history of tastefully transforming homes — his former Hollywood Hills house was so spectacular, it was featured in the movie Entourage — he wanted to make a few changes. 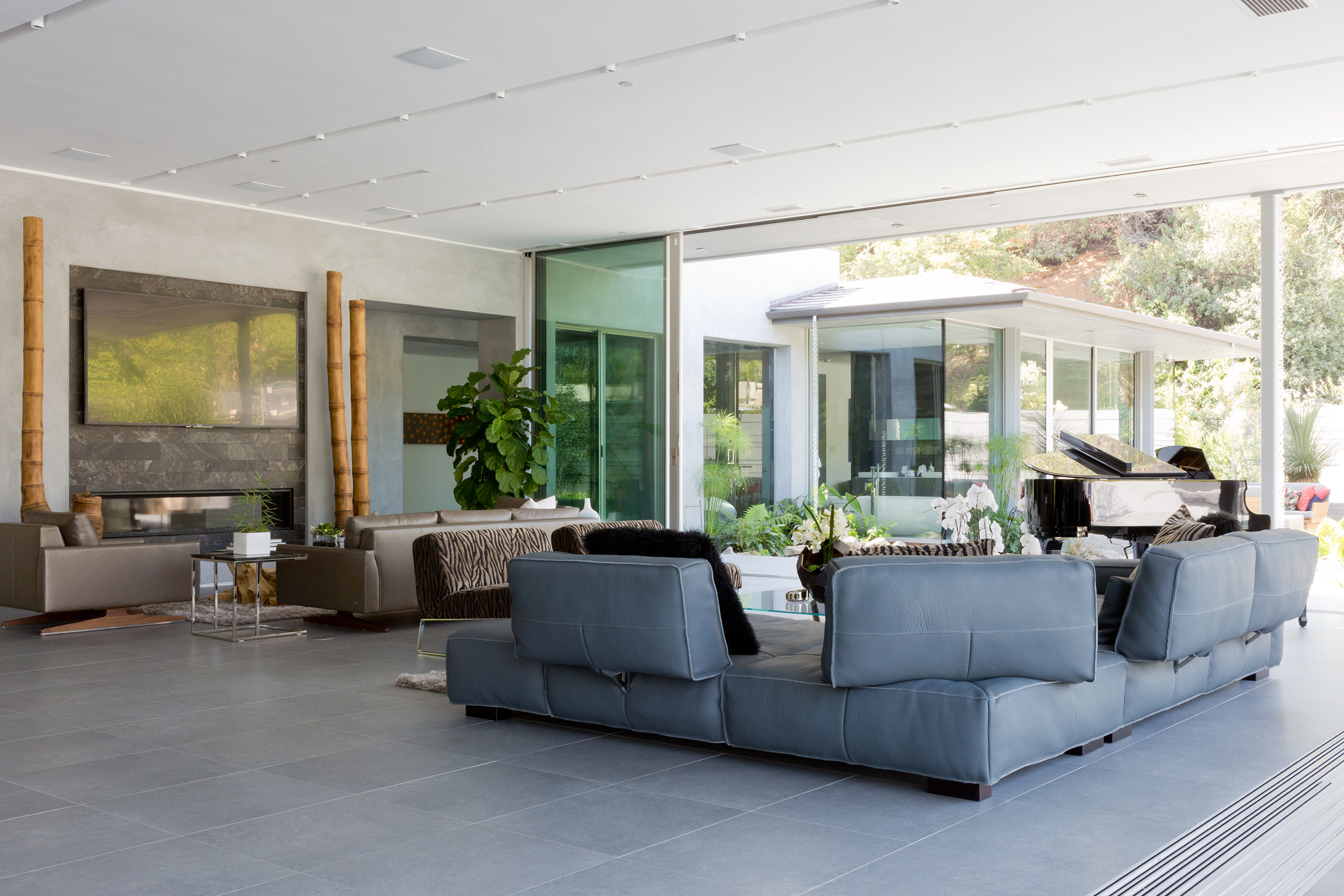 He called in a California-based architect, famous for clean-lined, warm modernism and honest materials, to handle the renovation. In the end, half of the home was torn down to the studs and rebuilt with sleek, angular bones. Before construction, he also called Cantoni design consultant Bernadette Capellaro — a decade-long collaborator in his projects — to select furnishings that flawlessly matched. 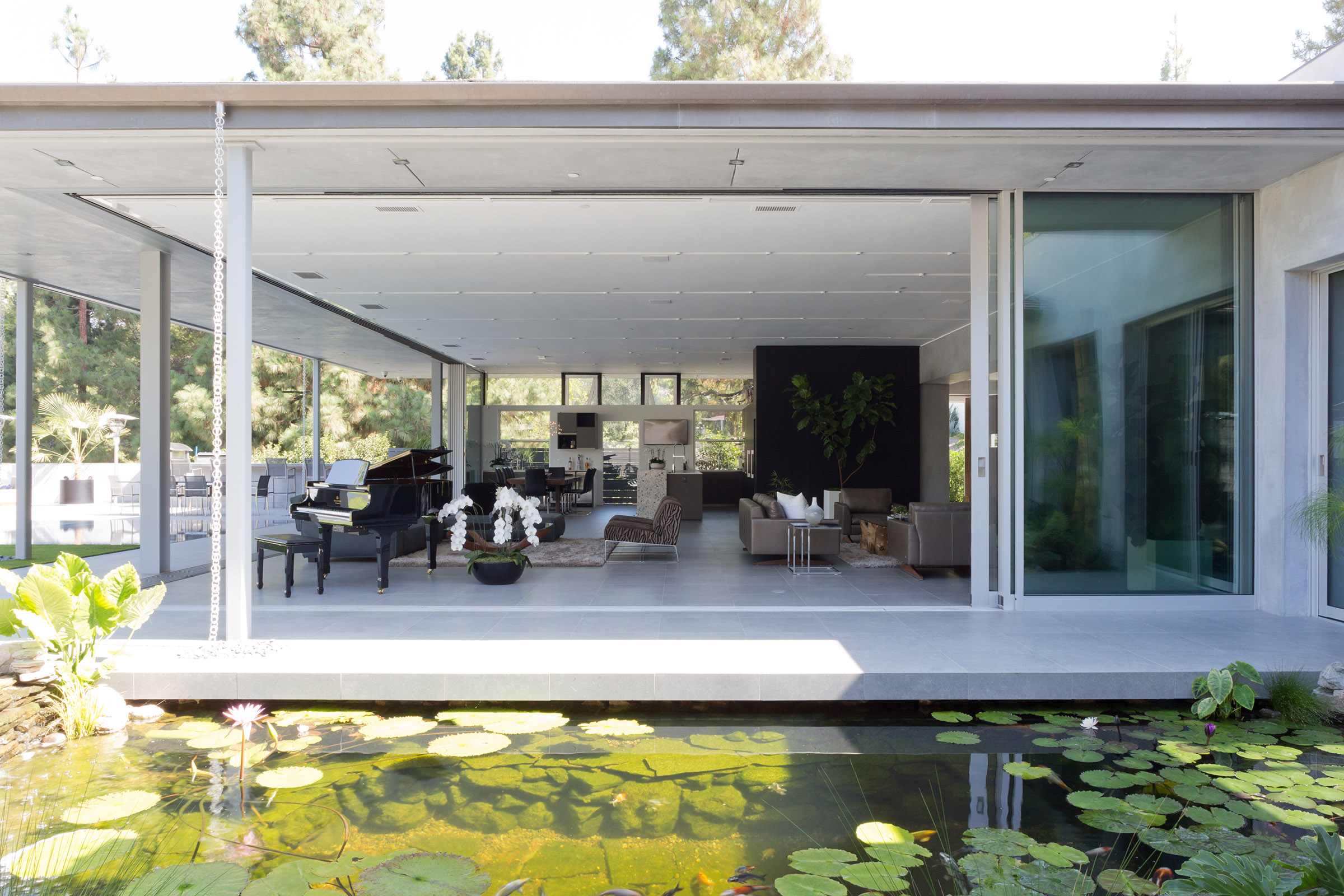 “I’ve worked with her for many years, and she understands my style,” Doug says. “She knows what I like, and it is effortless with her.” Bernadette walked through the home with Doug before construction to learn “what his dream was for the space,” she says. “Doug’s focus was to erase the lines between indoors and out, so that the eye is automatically drawn to the outdoors — a seamless landscape.” 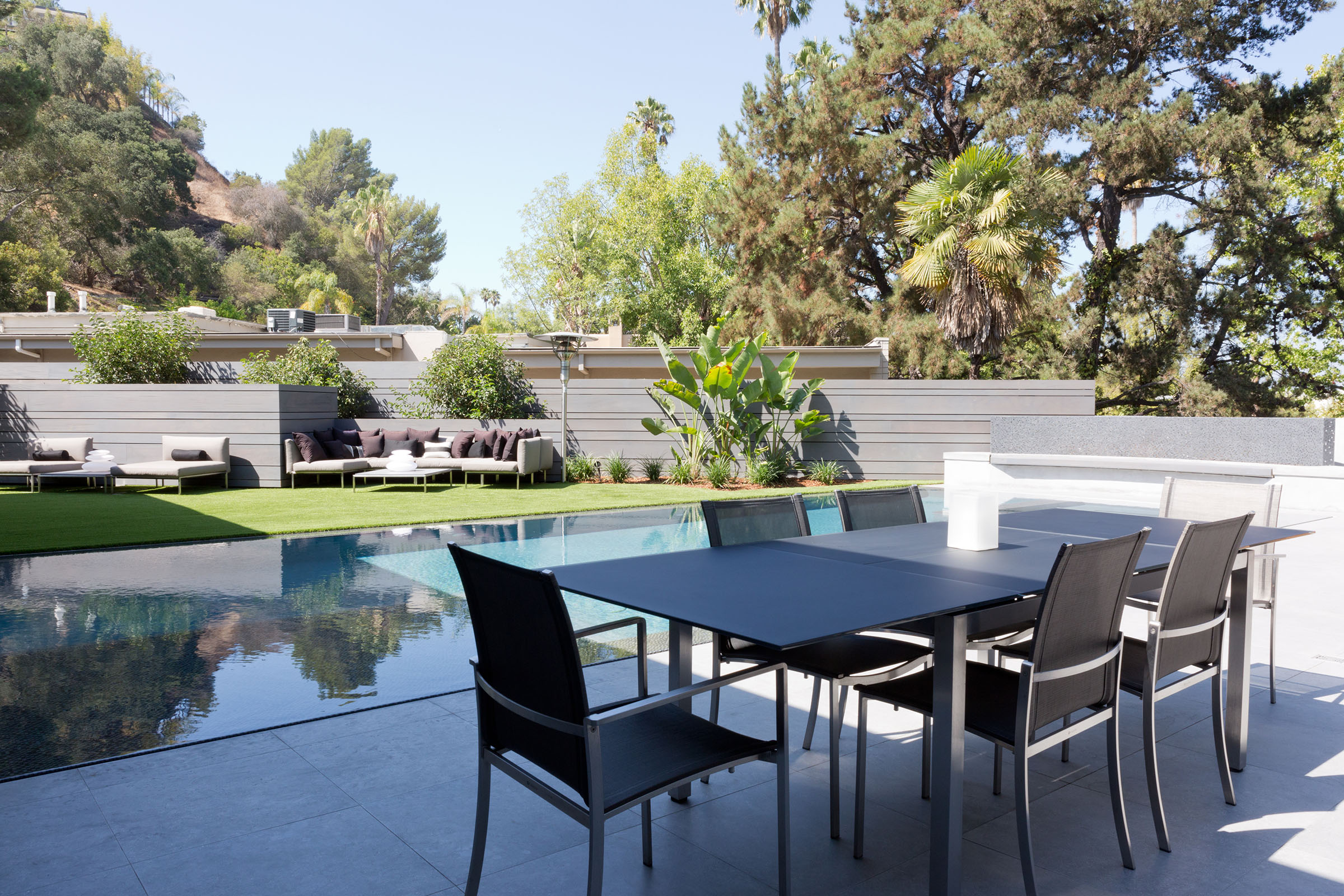 He also wanted a “slice of Bali in LA.” “I love Balinese style,” Doug says. Having traveled throughout Indonesia, he found several statement-making pieces that also would set the tone. A Buddha sculpture fronting the new infinity pool and koi pond in the back yard, and thousand-pound teak sculptures were brought in via crane. His dining-room table, a large piece of teak, is a Balinese feat, too. 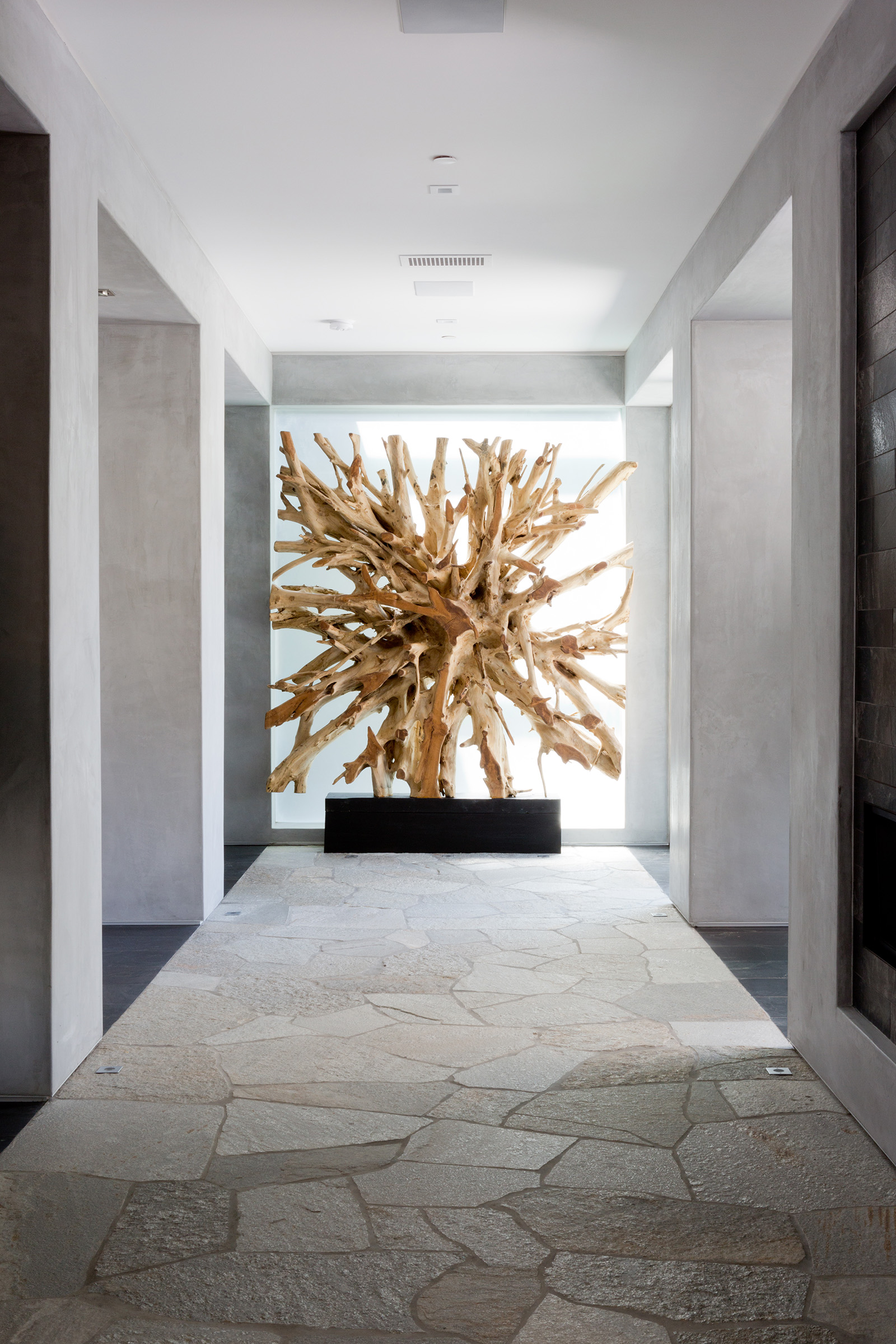 Working in tandem with his vision, Bernadette sourced all of the furnishings and accessories. She brought in Toro side chairs to flank the teak table. In the master bedroom, she chose the Ladera bed, natural walnut Brittany nightstands and Run Away table lamps, and a custom slate-blue rug. “Bernadette threw in some colors I wouldn’t have chosen — she was more cutting edge on that front, which I appreciated,” Doug says. 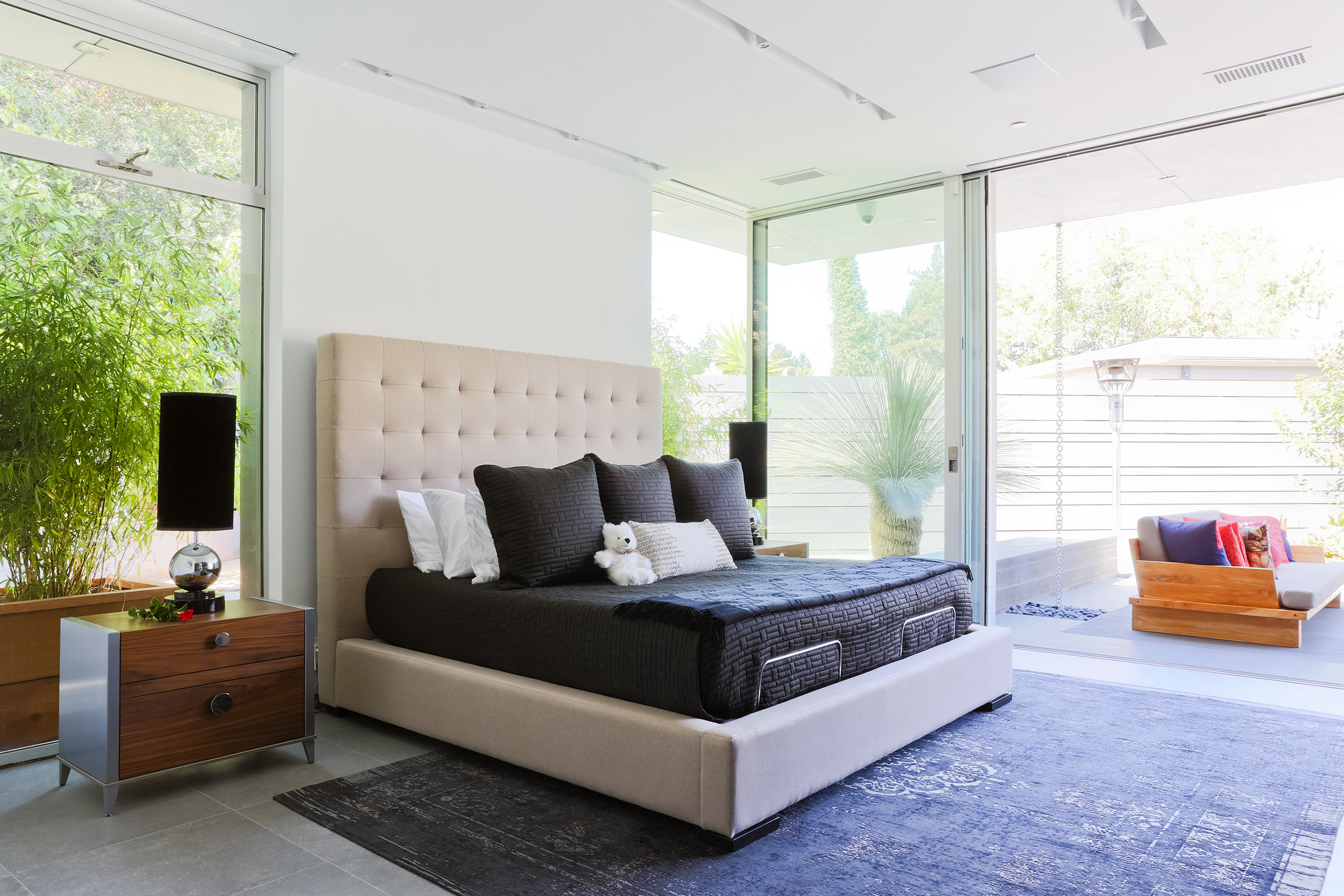 There was one challenge. “The massive living room needed two separate seating areas, so we had to ensure both were in harmony,” Bernadette says. “We didn’t want it to look matchy-matchy.” She stuck with simplicity. In one area, she brought in the Flynn sofa and Flynn chairs, which surround a teak coffee table from Bali. In the second space, she placed the Soho sectional and custom zebra-print Allure lounge chairs around the Elica cocktail table. Grizzly area rugs are found in both. 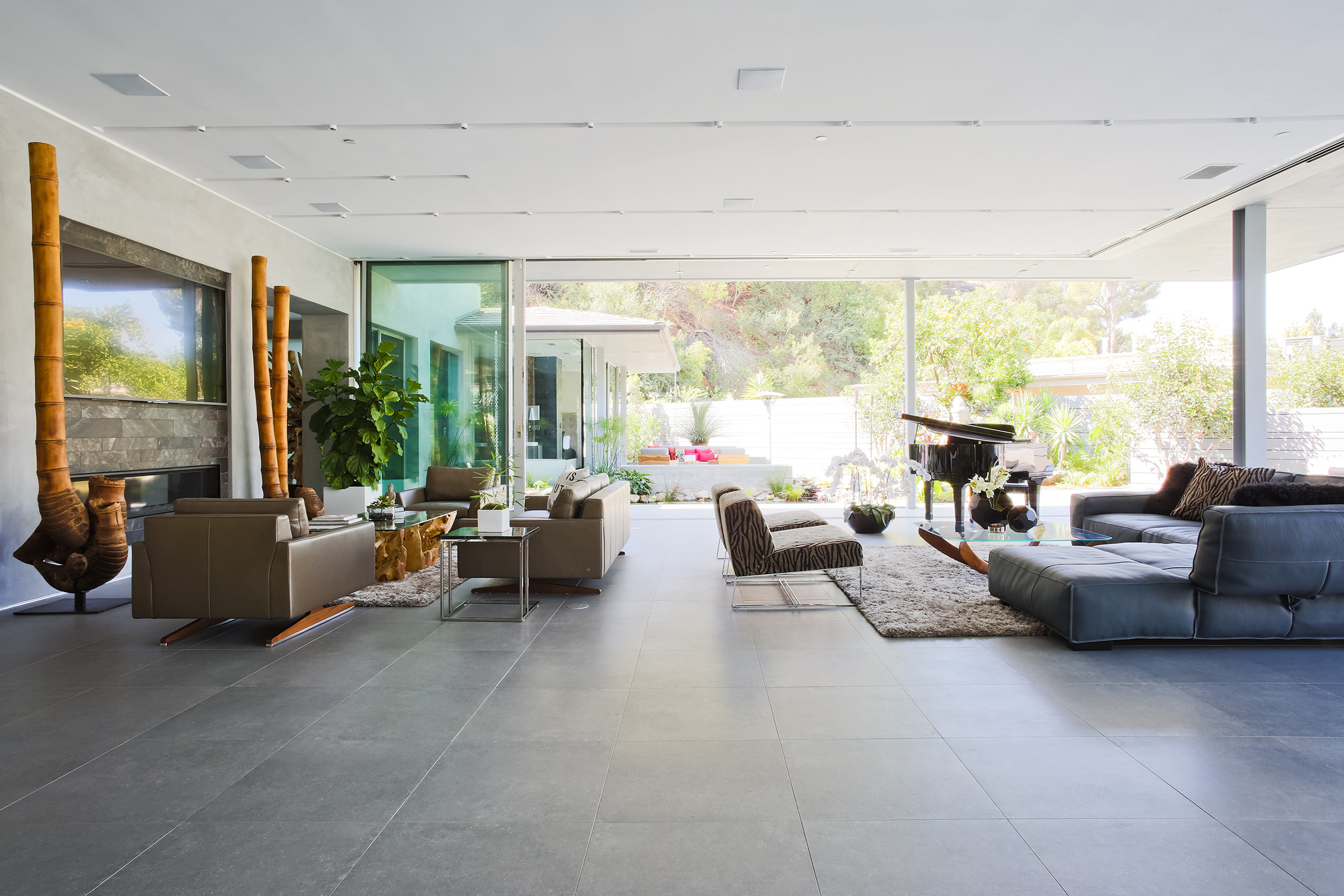 “Bernadette knows I like warm contemporary — which is why I love Cantoni,” Doug says. “It’s a one-stop-shop. I don’t have time to shop and I can find everything I need.”

The Zen process resulted in a very Zen space that both client and designer appreciate. “In spaces like this, I always feel at one with nature — it’s such a healthy, good vibe,” Bernadette says. “The neutral hues just allow the indoors to become one with the surroundings.” To that, we say, “Om.”

Learn more about design consultant, Bernadette Capellaro, by checking out her entire portfolio here. Whether you are building a new home or simply shopping for the perfect piece of modern furniture to complete a room, a complimentary one-on-one consultation with our design team can help you create a space you’ll love. Click here to book your appointment! A Fresh Take on an Urban Oasis

Prepare Your Home for Holiday Guests in 10 Steps