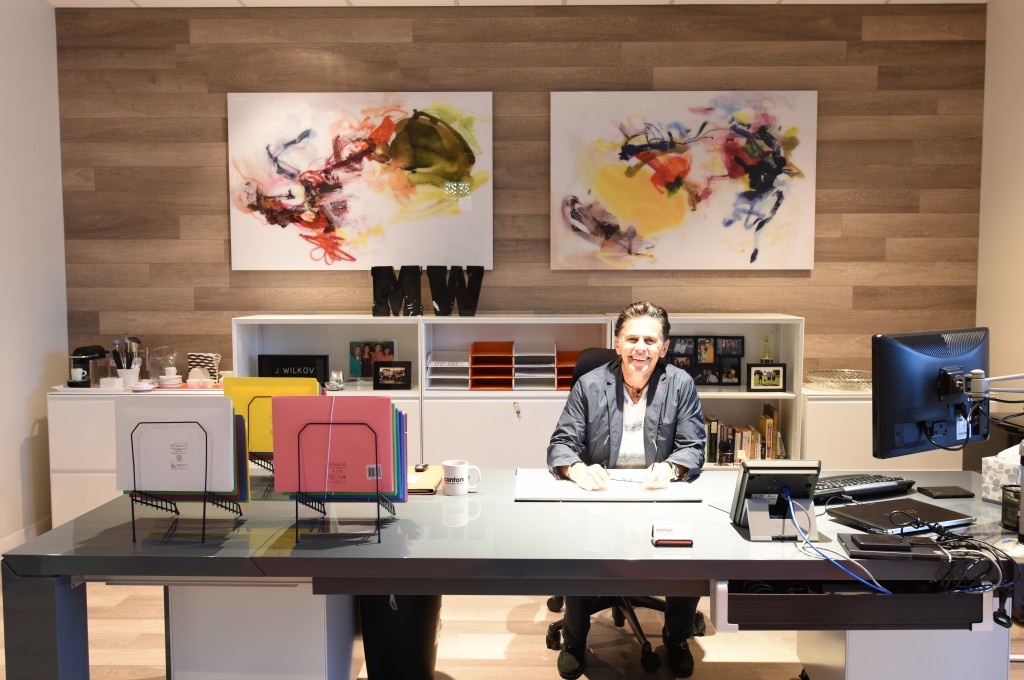 While Cantoni’s Founder & CEO, Michael Wilkov (aka MW) was away at the fall 2014 High Point Market, Cantoni’s Dallas Visuals Team came out to play…spearheading the secret operation known as “MW’s Office Makeover,” Anne Mancuso gathered her troops to give the big boss’ office a serious and much needed facelift. With only 4 days to complete the task, such a transformation seemed like an impossible mission…so we asked Anne, “How’d you do it?” and here’s what she had to say…

“To put it mildly, his previous office was a disaster…and since our company is an innovator and leader in the furniture and design industry, our CEO’s office should reflect just that, while also being an extension of himself–stylish, sophisticated and savvy with a touch of whimsy.” Anne is known around our corporate Dallas office as the rule- skirter, boundary pusher and the “what box?” thinker, so this undercover design project had her name written all over it.

Generally with these types of undertakings, you’d think to have a solid and detailed plan in place, but not this free spirit. Anne told us, “I never plan every detail of any project–over-planning kills magic. I work best with a general idea of how I want a space to look and feel, and ebb and flow with the rest.”

Anne started with the basics of picking a color scheme. She was set on a neutral color palette with a pop of orange, “MW’s favorite color,” she explained. Before they could begin anything though, Anne was adamant that the carpet had to go…after stripping the carpet and installing a chic wood floor and wall, Anne focused on the rest of the design, which in this case was highly dictated by function.

Whereas her usual gig involves a fantasy world of showroom displays that nobody has to live or function in, Anne knew that functionality in MW’s office was top priority. “One of the essential tasks was finding a home for all of his paperwork, files, documents, and catalogs, she explained. Luckily, we recently introduced the smart cabinet collection from Italy, which surpassed our needs for file drawers, shelves for catalogs with room to grow, and most importantly provided additional surface space for his beloved espresso machine.” 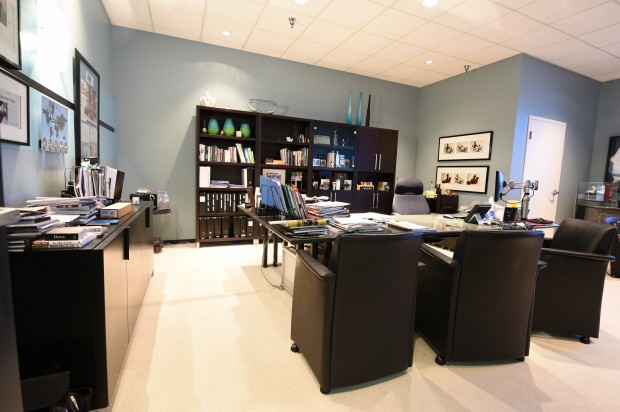 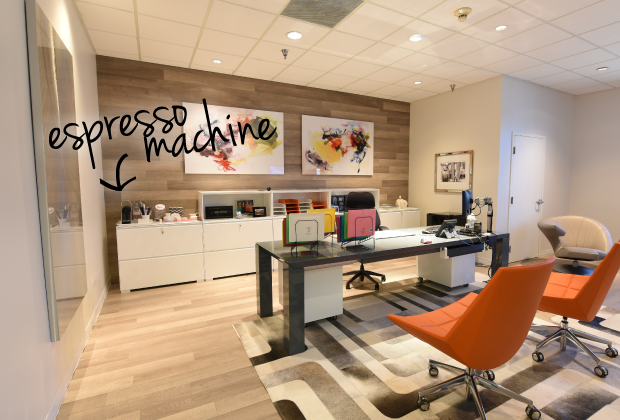 Once Anne, with the help of MW’s outstanding Exectuive Assistant, Lindsay Butler, managed to organize and find a home for all of his important files and documents, it was time to address his desk or desks in his situation. As you can see in the before pic, MW needed and sure enough used every inch of his desks. Anne explained to us after taking a fieldtrip to our Outlet store just next door, she scored the perfect Bonaldo dining table. Of course we were thinking, dining table? What happened to the desk? Anne explained though, “What’s great about this table is that it extends, giving MW ample work-space, plus its beautiful taupe lacquer color worked perfectly with my color story.”

Last on the list of functionality was creating a space wherein MW could hold collaborative meetings. Although the occasional chairs Michael had in place were visually appealing, they were no longer serving a purpose. So, Anne replaced them with another extendable dining table, this time a round shape, creating that all-inclusive vibe. Expanding from 51” to 72”, the Gyro Table was a perfect solution both from a functional and aesthetic perspective. 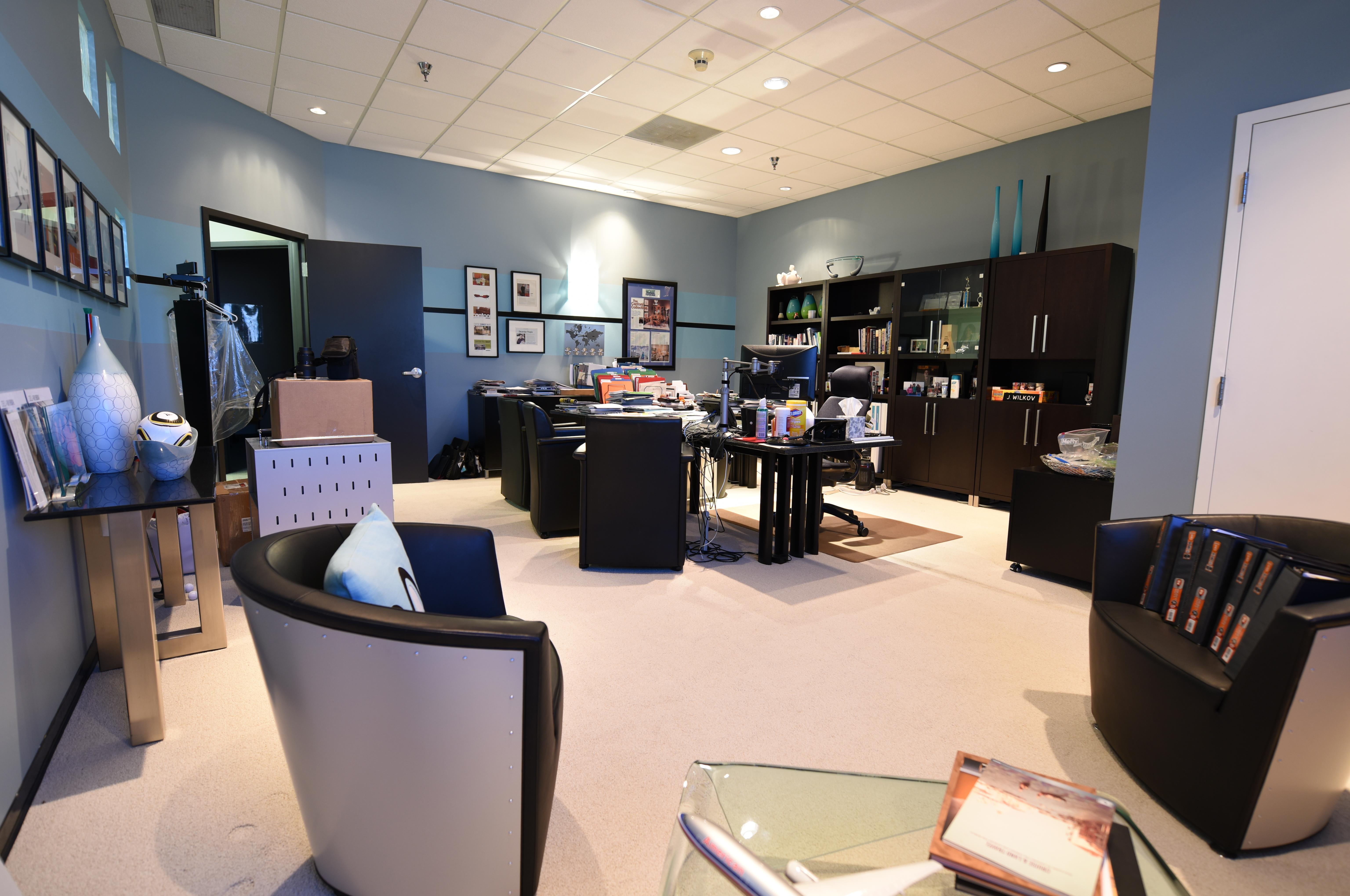 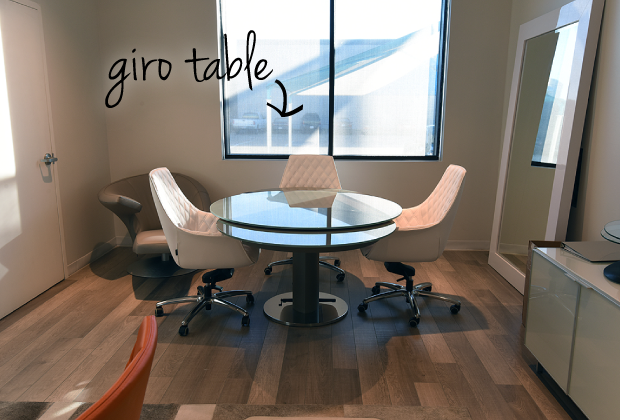 Once all the elements of functionality had been achieved, according to Anne, filling in the blanks was easy! “Art and accessories are the final pieces to any design puzzle and I didn’t want to surround MW with stuff just for the sake of décor. He is a minimalist at heart, so I wanted the accent pieces to be meaningful.” Anne selected only a few pre-existing sentimental pieces like MW’s late father’s nameplate, family pictures, sports memorabilia gifted to him by various pro athletes, and lastly a few magazine articles written about him. 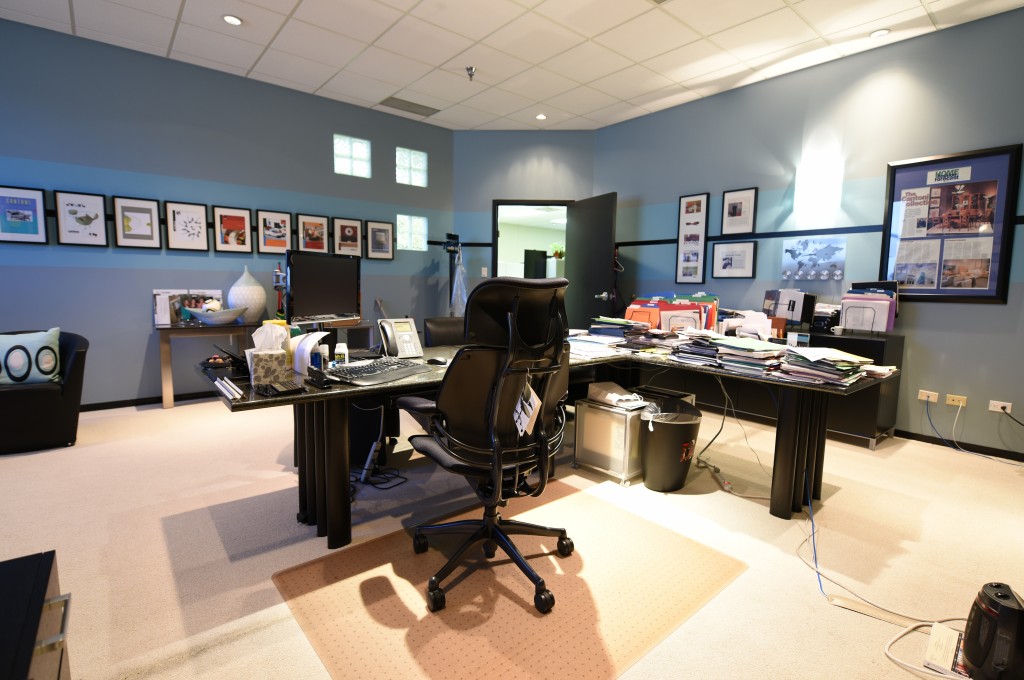 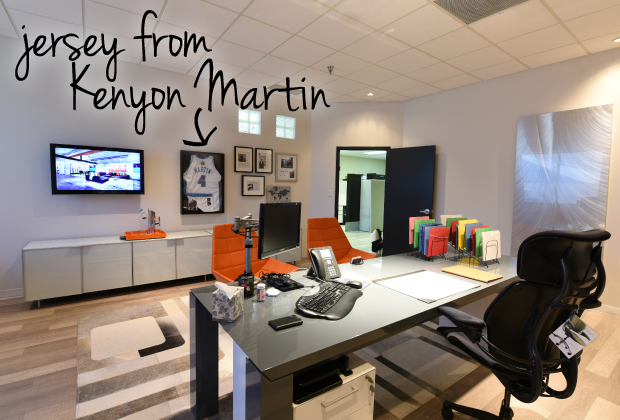 The final touches included a few playful pieces that Anne and her team knew would bring him great joy. “If there’s one way to get a big smile out of the big boss, it’s with a picture of a dog, Anne told us. He absolutely loves dogs, especially bulldogs, so when we received the bulldog artwork, we knew we had to have it!” And since he is the boss after all, he deserves to unwind and relax every now and then…and what better way to do so than with a little mini bar at hand? Anne said, “The orange Stack Rectangular Tray was the perfect final touch. Not only was it a way to add in my pop of color, but it also created just the right amount of space for MW’s favorite drink of choice.” 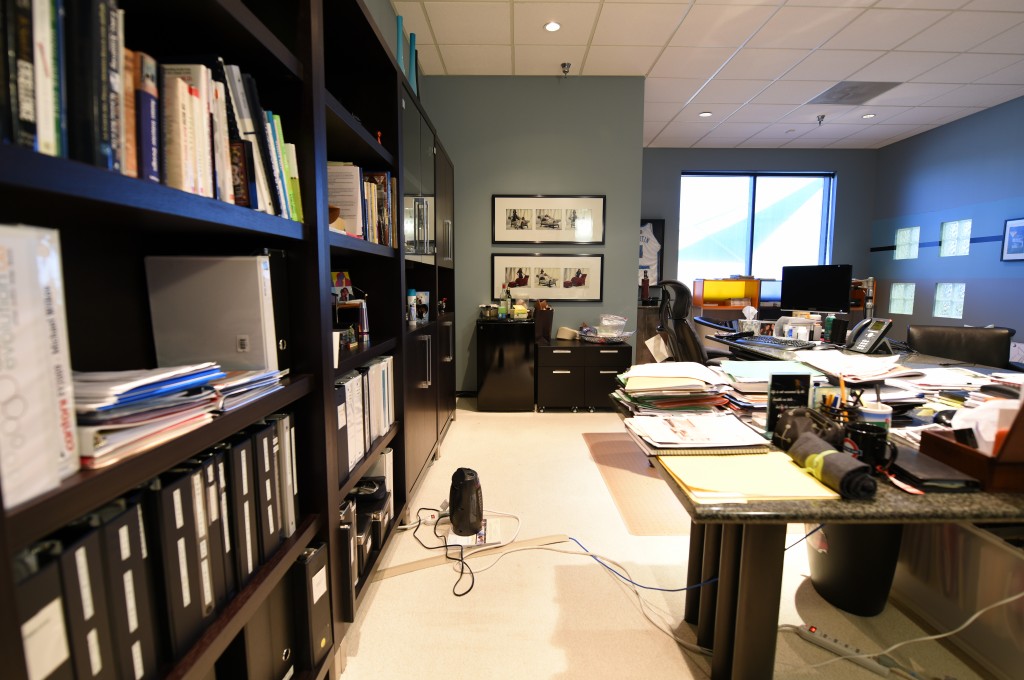 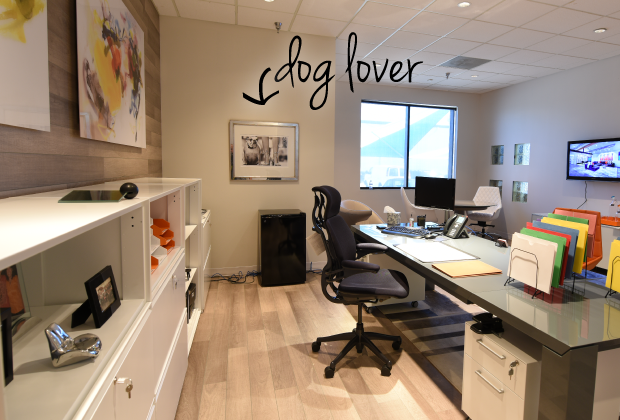 Anne concluded, “This project was such a blast to complete. It is no longer dark and dreary but rather bright and inviting!  At least now getting summoned into the boss’ office isn’t so terrible…”

Wondering what the big boss had to say to his surprise office makeover? Check out his reaction in our short video below!